Uit: A lear of the steppes

“ALL my childhood,” he began, “and early youth, up to the age of fifteen, I spent in the country, on the estate of my mother, a wealthy landowner in X—- province. Almost the most vivid impression, that has remained in my memory of that far-off time, is the figure of our nearest neighbour, Martin Petrovitch Harlov. Indeed it would be difficult for such an impression to be obliterated: I never in my life afterwards met anything in the least like Harlov. Picture to yourselves a man of gigantic stature. On his huge carcase was set, a little askew, and without the least trace of a neck, a prodigious head. A perfect haystack of tangled yellowish-grey hair stood up all over it, growing almost down to the bushy eyebrows. On the broad expanse of his purple face, that looked as though it had been peeled, there protruded a sturdy knobby nose; diminutive little blue eyes stared out haughtily, and a mouth gaped open that was diminutive too, but crooked, chapped, and of the same colour as the rest of the face. The voice that proceeded from this mouth, though hoarse, was exceedingly strong and resonant. . . . Its sound recalled the clank of iron bars, carried in a cart over a badly paved road; and when Harlov spoke, it was as though some one were shouting in a high wind across a wide ravine. It was difficult to tell just what Harlov’s face expressed, it was such an expanse. . . . One felt one could hardly take it all in at one glance. But it was not disagreeable–a certain grandeur indeed could be discerned in it, only it was exceedingly astounding and unusual. And what hands he had–positive cushions! What fingers, what feet! I remember I could never gaze without a certain respectful awe at the four-foot span of Martin Petrovitch’s back, at his shoulders, like millstones. But what especially struck me was his ears! They were just like great twists of bread, full of bends and curves; his cheeks seemed to support them on both sides. Martin Petrovitch used to wear–winter and summer alike–a Cossack dress of green cloth, girt about with a small Tcherkess strap, and tarred boots. I never saw a cravat on him; and indeed what could he have tied a cravat round? He breathed slowly and heavily, like a bull, but walked without a sound. One might have imagined that having got into a room, he was in constant fear of upsetting and overturning everything, and so moved cautiously from place to place, sideways for the most part, as though slinking by. He was possessed of a strength truly Herculean, and in consequence enjoyed great renown in the neighbourhood. Our common people retain to this day their reverence for Titanic heroes. Legends were invented about him. They used to recount that he had one day met a bear in the forest and had almost vanquished him; that having once caught a thief in his beehouse, he had flung him, horse and cart and all, over the hedge, and so on. Harlov himself never boasted of his strength. ‘If my right hand is blessed,’ he used to say, ‘so it is God’s will it should be!’ He was proud, only he did not take pride in his strength, but in his rank, his descent, his common sense.

“Our family’s descended from the Swede Harlus,” he used to maintain. “In the princely reign of Ivan Vassilievitch the Dark (fancy how long ago!) he came to Russia, and that Swede Harlus did not wish to be a Finnish count–but he wished to be a Russian nobleman, and he was inscribed in the golden book. It’s from him we Harlovs are sprung! . . . And by the same token, all of us Harlovs are born flaxen-haired, with light eyes and clean faces, because we’re children of the snow!”

“What nonsense will you talk next!” Harlov answered serenely; “since I say so, so it was!” 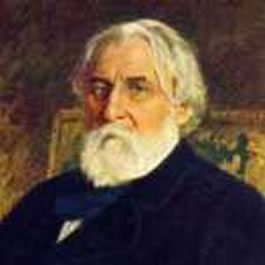